Sign up today for Parking Passes for firefly shuttles!   They will go quick. Berry Springs Lodge still has a few rooms open for event.

The firefly shuttles from Sugarlands Visitor Center to Elkmont will be operating June 6-13 this year. All visitors wishing to see the fireflies during this time period will need to make advance reservations for a parking pass at www.recreation.gov. Parking pass sales will begin on or after April 29. Additional information about parking passes...
Because of the popularity of the synchronous firefly display, access to the Elkmont area is restricted after 5 p.m. in late May and early June to registered campers and those who park at the Sugarlands Visitor Center and ride a special shuttle trolley to Elkmont. Access to the Sugarlands parking lot and to the trolley during this period requires a parking pass, which must be obtained in advance through www.recreation.gov
Like many seasonal events in nature, the timing of the display of synchronized fireflies is influenced by environmental conditions and is impossible to accurately predict in advance.

ynchronous fireflies (Photinus carolinus) are one of at least 19 species of fireflies that live in Great Smoky Mountains National Park. They are the only species in America whose individuals can synchronize their flashing light patterns.
Fireflies (also called lightning bugs) are beetles. They take from one to two years to mature from larvae, but will live as adults for only about 21 days. While in the larval stage, the insects feed on snails and smaller insects. Once they transform into their adult form, they do not eat.
Their light patterns are part of their mating display. Each species of firefly has a characteristic flash pattern that helps its male and female individuals recognize each other. Most species produce a greenish-yellow light; one species has a bluish light. The males fly and flash and the usually stationary females respond with a flash. Peak flashing for synchronous fireflies in the park is normally within a two-week period in late May to mid-June. 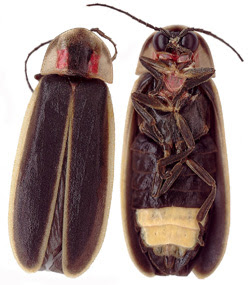 Synchronous fireflies produce light in their lanterns, the pale area of the abdomen visible on the underside of the insect above.
The production of light by living organisms is called bioluminescence. Fireflies are a good example of an organism that bioluminesces, but there are others as well, such as certain species of fungus, fish, shrimp, jellyfish, plankton, glowworms, gnats, snails, and springtails.
Bioluminescence involves highly efficient chemical reactions that result in the release of particles of light with little or no emission of heat. Fireflies combine the chemical luciferin and oxygen with the enzyme luciferase in their lanterns (part of their abdomens) to make light. The light produced is referred to as a "cold" light, with nearly 100% of the energy given off as light. In contrast, the energy produced by an incandescent light bulb is approximately 10% light and 90% heat.
No one is sure why the fireflies flash synchronously. Competition between males may be one reason: they all want to be the first to flash. Or perhaps if the males all flash together they have a better chance of being noticed, and the females can make better comparisons.
The fireflies do not always flash in unison. They may flash in waves across hillsides, and at other times will flash randomly. Synchrony occurs in short bursts that end with abrupt periods of darkness.
Timing of the Display
The mating season lasts for approximately two weeks each year. The dates that the fireflies begin to display varies from year to year-scientists haven't figured out why, but it depends at least in part on temperature and soil moisture. It's impossible to predict in advance exactly when the insects will begin flashing each year.

As the season begins, a few insects start flashing, then more join the display as the days pass. They reach a "peak" when the greatest number of insects are displaying. After peak, the numbers gradually decline each day until the mating season is over. Since 1993, this peak date has occurred at various times from the third week of May to the third week in June.
During the two week long mating season, the quality of individual nightly displays can be affected by environmental factors. On misty, drippy evenings following rainfall, the insects may not readily display. Cool temperatures, below 50º Fahrenheit, will also shut down the display for the night. Moon phase has been observed to affect the timing of nightly displays-on nights with a bright moon, the insects may begin flashing a bit later than usual.

Posted by Berry Springs Lodge at 5:05 AM No comments:

Friday morning marked the official opening of a newly renovated Sugarlands Visitors Center in the Great Smoky Mountains National Park.
This $200,000 project was funded by two of the park’s support organizations, with park personnel providing much of the labor.
The Great Smoky Mountains Association and Friends of the Smokies each contributed  $100,000 for the project, and leaders of those groups helped Superintendent Dale Ditmanson assisted with the scissors at the opening.
Speaking before the ribbon-cutting, Ditmanson said Sugarlands was projected to accommodate about 500 people a day when it was originally designed but that on Easter alone about 6,000 people visited. On an annual basis more than 800,000 people come through the center to get “information and orientation” on the park, Ditmanson said.
Included in the renovations are an updated and redesigned lobby with a reception desk that faces the two doors and has a decorative stone wall.
There is also a new media center with video about the environment and activities within the park.
In addition, there is a new floor, lighting and an improved entryway to the park museum, which Schroer said was so hidden by subpar design that for years some visitors did not even know it was there.
Sugarlands opened in 1966 and is named for the region in which it sits, an area that was home to a multitude of sugar maple trees when it was homesteaded in the early 1800s.
Various energy-saving features have also been factored into the renovation, Ditmanson said, including a new roof, LED lighting and reactivation of an array of solar panels powering the adjacent comfort station.
Schroer said construction on the building began in January and was mostly performed from 2-11 p.m. so that the center never missed a day of operation.
Posted by Berry Springs Lodge at 5:15 AM No comments:

The Great Smoky Mountain Wheel will be opening this summer 2013

Just 10 minutes from Berry Springs Lodge towering 200 feet-tall, the Great Smoky Mountain Wheel  with all glass gondolas that seat up to 8 guests sits as the center piece of The Island in Pigeon Forge, it stands as one of the tallest attractions east of the Mississippi!  It features 42 Gondolas, Climate Controlled Comfort, Spectacular Night Ride and a 24,000 square feet LED Light Show

Photos of building the Wheel

Posted by Berry Springs Lodge at 3:21 PM No comments: